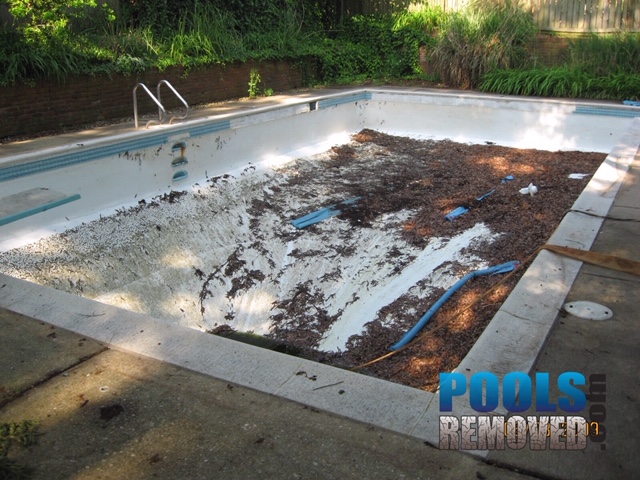 One of our earlier pool demolitions was at the former residence of President Gerald Ford in Alexandria VA. Prior to beginning the demolition of the former President’s swimming pool I had done some online reading about the president, the Alexandria property, and the pool. Many stories stated that Gerald Ford was a simple man and his most prized possession was his swimming pool at his home in Alexandria. This made for a very weird feeling when I set the hydraulic breaker on the pool’s floor and initiated the first crack in the concrete; I’m pretty sure President Ford rolled over in his grave.

It’s been since June 2009 that we demolished President Ford’s swimming pool, I can attest, even though he was not president at the time the pool was built; the pool was built for a president. To this day, it is one of the most solid structures we have demolished. I remember one cool component of the pool was the original filter was still on site, it was a huge, rounded, cast iron filter that weighed hundreds of pounds, it resembled a witch’s brewing pot; I haven’t seen another one like it since.

President Ford was an avid swimmer. It’s said that neighbors could hear a splash in the pool almost daily before becoming president. Ford had the same company that built the pool at his Alexandria residence, build a pool at the White House after moving in.

The street that Ford’s former residence is on is a very unique neighborhood. The houses are well maintained in their original state. The yards are all well cared for. It shows that the community carries a lot of pride in being a part of presidential history. Needless to say, our activity was not well perceived by everyone.

One resident of senior age, I suspect an original owner said to me “what are you doing to this historic property?” We also received some nasty looks as neighbors drove past in the mornings. While others were more accepting. The recreation of swimming is not everyone’s cup of tea. Like everything else, swimming pools do have a life span, eventually they will require demolition or removal, or they will require extensive expensive renovations and repairs.

Are you ready to get your Alexandria VA swimming pool removal project underway? Then please click here and lets get to work!

We have experience in concrete, gunite, fiberglass, vinyl liner, and spa demos, as well as the removal of tennis and sport courts.

Get twelve months use out of your yard as you want it.

© 2021 PoolsRemoved.com | All Rights Reserved. |Web Development and Hosting By EKDesigns.com